My Scrap offering this month is the second cover for a chair seat for Mrs Snail (see the link to Jan below) for her new shop. This one was knitted using a base colour of oatmeal with flashes of green, lilac and brown, stripes of a novelty purple yarn – think tinsel in red green and blue with lots of soft purple strands mixed in – and several small balls of other plummy colours.

Scrap Happy is curated by Kate and Gun (links below) on the 15th of each month – a glorious collection of posts about making things from all kinds of scrap. Do have a look – inspiration may strike!

Last winter I knitted quite a few pairs of socks and for each I bought a ball of yarn. But each pair uses less than a ball so I had a basket full of 4 ply yarn in various colours. It sat there looking at me reproachfully! But what to do with them?

The first chilly morning of the autumn came a week or two ago and when I put on my coat to walk the dogs after breakfast I decided it was time to get my gloves out. One pair was in holes and when we got back home the other was soaking wet because it had started to rain. I really need two pairs each winter so that I always have a dry pair. Inspiration!

The pattern I used last time was for DK yarn but looking through my books I found this one I bought second hand at a craft fair a few years ago.

And in it a pattern for gloves in 4 ply with a fair isle pattern. It is such an old book the pictures are all in black and white!

Putting different balls side by side I decided to use some plain purple for the unpatterned parts and some self striping blue for the area where the fair isle should go. I rather like the result.

I still had yarn left over on each ball and would probably have had enough of just one but I think the contrast works rather well. Now I just have to decide whether to make more gloves or find another use for the rest of the yarn. Mrs Snail’s granny squares look nice so maybe….

You may remember that a while ago I wrote a post about things I had been making, including 2 cushions. (If you missed it you can read it here) One was a present for my daughter and made of fabric, the other was knitted using some wool left over from another project. I noticed that I made the fabric one during the day and the knitted one in the evening whilst sitting with my feet up. Which sort of made sense – to cut out fabric on a big table or to sew on the machine I go into my studio over the utility room. To go up there after dark when it is colder took more effort than sitting in front of the fire. 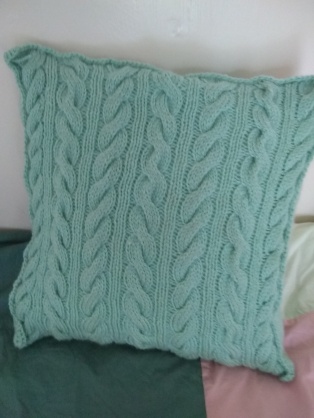 But now spring has come, the evenings are light and the weather is warm and still I only do sewing in the day! Then I realised that I had inherited this pattern from my mother. The more I thought about it the more curious it seemed. It was only when I began to remember my childhood home that it all began to make sense.

My mother kept her hand powered singer sewing machine (so no integral light!) in the tiny ‘boxroom’ which had a fold out camp bed for visitors but was essentially used for storage. To use the machine she carried it down to the living room and used the dining table so it had to be put away in order to serve the evening meal. After that she would sit with my father and watch TV – and knit at the same time.

I also realised that, like many houses of that era, there were no table lamps, and certainly nothing like the flexible task lamps we have now. In fact, I now remember, there wasn’t even a standard lamp which she could have had by her chair. Each room had a central pendant light so that to do sewing involved moving a table so that the light fell on it (but never as bright a light as I would expect to have now) or positioning it in front of a window. Another reason for sewing in daylight. Knitting, of course, can be done with weaker light – at least if it is fairly simple. Hers always was rather ‘functional’! Endless plain jumpers in sensible colours. 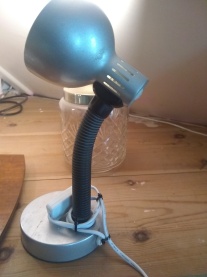 Now my studio is well lit with strip lights down each side of the ceiling and a choice of task lights. I have a fan heater in there so that I can be warm whatever the outside temperature.

So Why? Oh Why? can I not sew in the evening or knit in the afternoon? But I feel ‘all wrong’ if I try!

If you are still bound by old, irrelevant rules I would love to hear about them. I would feel less stupid!

I love making things but haven’t posted about the creative side of me for a while. It was only when I was reviewing some photos that I realised how many things I had made recently.

The first was a blanket for my grandson Sean. Since he started at Swansea University (read about him here )he has been saying that he is sometimes cold in his room. I suspect that he has been sitting still for too long late at night – hopefully studying but probably gaming on his computer! He had been taking his duvet cover off and wrapping himself up in that so I thought I would make him a blanket. He is young, male, only recently domesticated and there is not much space for him to store things in his room in Halls. So I used synthetic double knitting in boy colours! And since I get bored knitting a whole blanket in one piece I did squares and crocheted them together. To make it more fun I devised a number of variations on a theme of stripes of stocking stitch and reverse stocking stitch.

Then it was my daughter’s birthday and I spotted a remnant of linen in the Ecoshop in Cardigan. Just enough to make a cushion. I had some felt left over from making Christmas decorations and there were tulips beginning to flower in the garden. Hey presto..

Looking for the felt I saw most of a ball of Aran weight wool left over from a jumper I made a few years ago. Several of my own cushion covers are coming to the end of their lives so I fiddled around and devised a pattern. There is a similar amount of blue in the same yarn so maybe there will be a pair soon.

Then Mrs Snail and I went on a course at Studio 3 in Cardigan to learn how to make a coptic bound book. She has already blogged about our day so you can read about it (here) Mine was a birthday present for my son so I had to stay quiet about it until now! 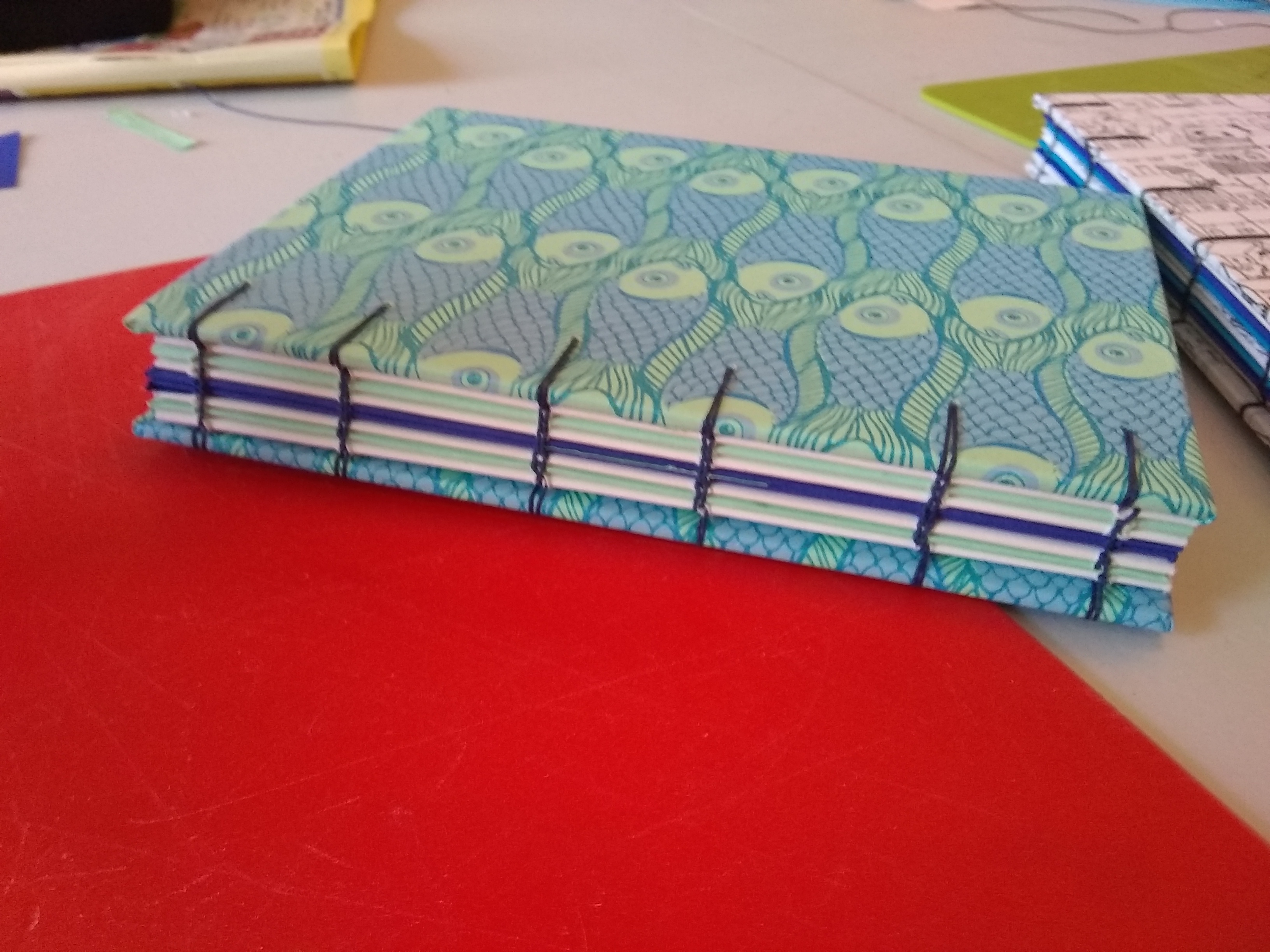 Finally my new friend Roni came over and showed me how to turn a bowl on the lathe. She is a professional woodturner (find her here) and makes some beautiful things but also proved a very good and patient teacher so it was great to learn from her. We found an old piece of wood which was already cut into a disc shape but it proved to be rather rough and a bit too old so it was not worth sanding and polishing. Even so I was quite pleased with what I produced and have started on another with a better bit of wood. 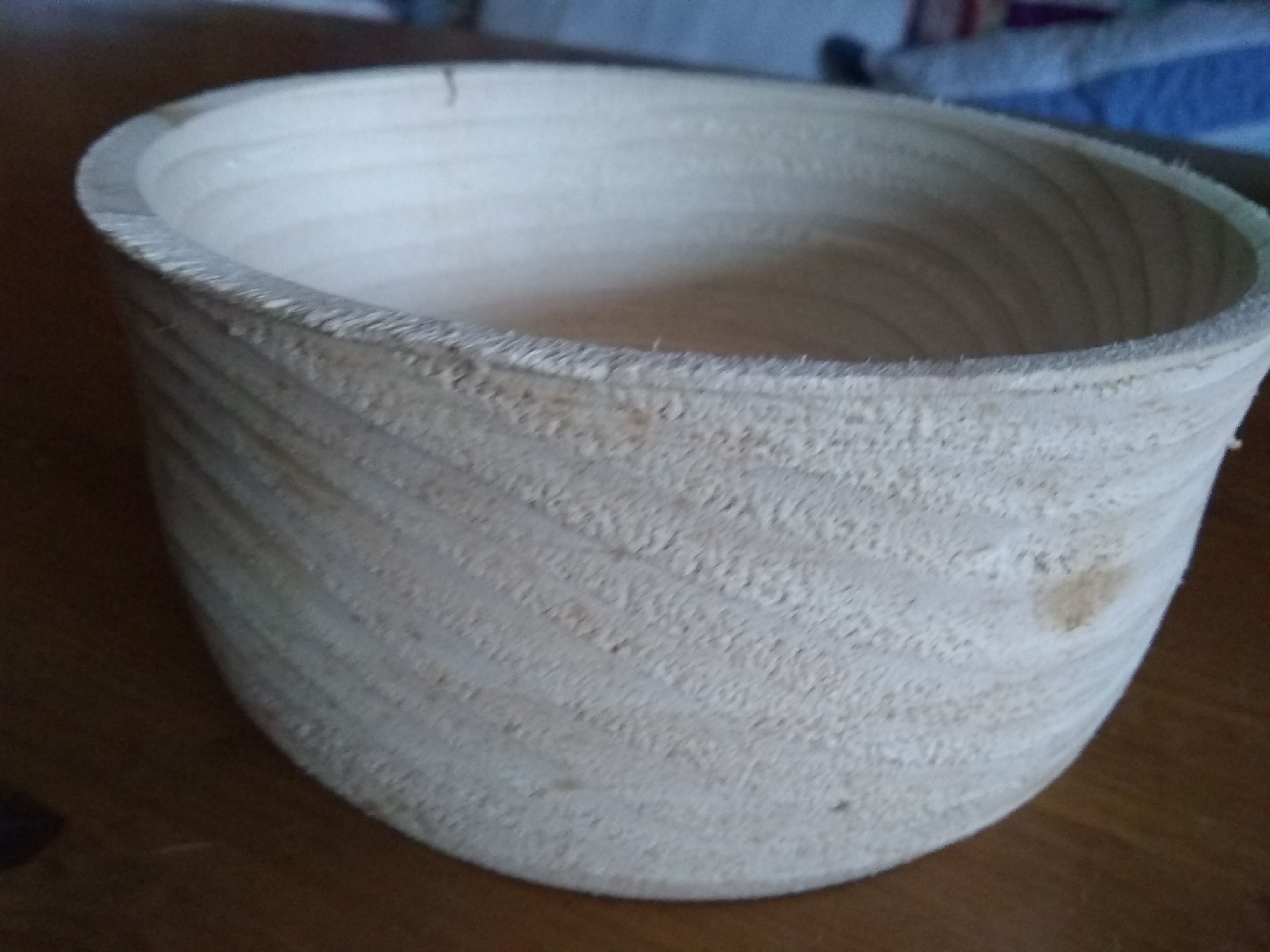 Apart from the book they have all involved designing as well as making so my creativity has had quite a good workout recently!